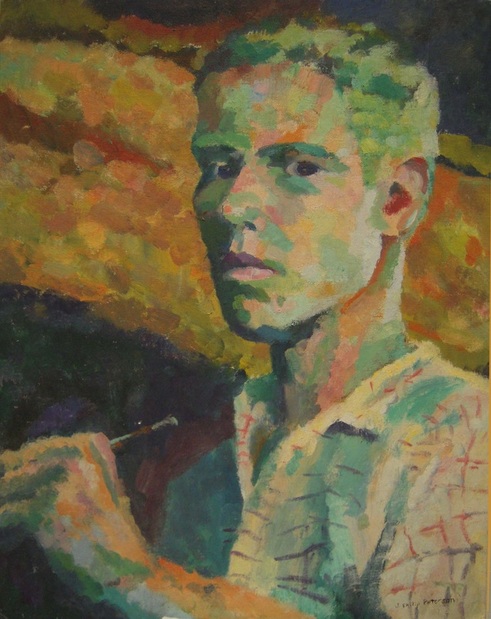 (The self portrait image above is from about 35+ years ago...)

J. Philip Peterson, a graduate with a BFA from the Philadelphia College of Art, (now called the University of the Arts) is an artist who has been experimenting with light and color since the late 60’s. His pictures are unique in that they seem alive and moving - due to the vivid colors and the changes that different lighting brings upon them. He uses certain color pallets for incandescent light, fluorescent light and daylight, as the paintings tend to change dramatically depending on the light source.

Peterson began experimenting by using no black, but only pure color. He relies on pure colors equal in brightness (tone) to create an illusion of depth.

Peterson's studies began at age three under the tutelage of his mother, Phyllis Shoenberger Peterson, Huntingdon Valley artist and teacher. He also was taught early-on by Walter Baum, noted Bucks county impressionist artist. Since college , he has studied at the Aspen School of Contemporary Art in Colorado.

Mr. Peterson comes from a family of artists, which includes his father, Vincent C.J. Peterson, his sister, Judith A. Langan, and his mother, Phyllis Shoenberger Peterson. In l994, Connexions Gallery in Easton, PA presented the varied and contrasting works of this multi-talented family. His paintings have startled both serious and casual art critics from galleries in Palm Beach, FL to New England, where his paintings were selected for the noted New England Exhibit at Silvermine, Conn.

He has exhibited locally in juried shows at the Woodmere Art Gallery, Phillips’ Mill, and Cheltenham Center for the Arts. He has been represented locally at the Little Gallery in Phila., The Golden Door Gallery in New Hope, Connexions Gallery in Easton, PA, the
Rittenhouse Square Exhibits, and has had several one man shows. He most recently exhibited at Mixed Media Gallery in Doylestown PA, the Coryell Gallery in Lambertville, NJ, the Upstairs Gallery in Peddlers Village and the Fox Chase Cancer Center 2009 Annual Art Exhibition, New Hope, PA.

Mr Peterson also owned a gallery in Princeton NJ during the 1970’s where he showed his work and the works of other Bucks County artists.  He has exhibited at the Upstairs Gallery in Peddler's Village, PA.

He is now living and painting in La Paz, Baja California Sur, Mexico.

Peterson was also an Officer in the USN and worked for 30 years as an art directer/marketing/advertising/Trade Show specialist-Design/Production/setup, etc, in 2 small USA manufacturing companies...,